Hilton’s mission to be the “most hospitable company in the world” begins with hospitality toward its own team.

Hilton’s mission to spread the light and warmth of hospitality often begins with a warm welcome, such as this cheerful greeting from Allan Beres, bell captain at the Hilton McLean in McLean, Va.

In 1919 when Conrad Hilton opened his first hotel in the tiny Texas town of Cisco, he set out to spread “the light and warmth of hospitality.” Today, the McLean, Va.–based empire he created operates more than 6,100 properties in 119 countries and territories. The company has not only maintained its founder’s vision, it has become the beating heart of a culture that landed Hilton on Fortune’s 100 Best Companies to Work For list for five consecutive years.

“Our 430,000 team members are at the core of our business,” says Hilton’s chief human resources officer Matt Schuyler. “We consider them our family. They deliver on our founder’s vision to spread the light and warmth of hospitality at our hotels every day. As a business of people serving people, we know that when we show [our team] the same hospitality [we show guests], they’re able to bring their very best to our guests.”

This belief has spurred the creation of industry-leading benefits, resulting in less attrition and a more engaged workforce, which has been crucial as the company has scaled. Since Schuyler joined the company in 2009, Hilton has doubled its number of properties and its people.

“Back [when I joined] we had great brands but they were operating separately,” says Schuyler. “Through listening to our team members, we brought them together and aligned our culture, then expanded that culture across the globe.”

Hilton-provided benefits include a parental leave policy with 12 weeks of full-replacement pay and an adoption assistance program that provides a $10,000 reimbursement for expenses such as application and legal fees. The travel program Go Hilton gives team members, along with their families and friends, hotel stays at dramatically discounted rates. Hilton has also revamped its back of house, or what Hilton refers to as the Heart of House. To make it feel more welcoming, the team added thoughtful touches like more nutritious dining options, music, and Wi-Fi to behind-the-scenes facilities, which include team member spaces like locker rooms and cafeterias.

These and other culture-driving programs live under the banner of Thrive at Hilton, an overarching philosophy that encourages team members to “thrive in mind, body, and spirit.” The Thrive Sabbatical program, for instance, grants select team members four weeks of paid leave time and $5,000 to “pursue a dream or give a dream.” A recent recipient, Mira Macud, a single mother and administrative assistant at Conrad Dubai, a Hilton brand hotel, chose to return to her homeland, the Philippines, to learn sign language at the Philippine School for the Deaf, which enabled her to have a conversation with her 15-year-old-son for the first time.

An equally important program that’s also been a huge success in recruiting new talent is Operation: Opportunity. Launched in 2013, the program has resulted in Hilton hiring 30,000 veterans, military spouses, and caregivers, with an additional 25,000 hires pledged by the end of 2025. With more than 1,000 diverse roles available at the company, from engineers to chefs to corporate executives, the goal has been to create an environment where all team members can thrive.

“We are very deliberate about creating programs that benefit all of our team members, not just some,” says Schuyler. “We listen to our workforce, introduce new programs and adjust based on their feedback. But our work to have a great culture so we can continue to attract and retain great people is never done. We want to keep getting better and better.” 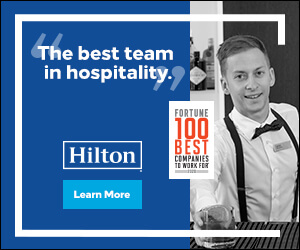 © 2020 Fortune Media IP Limited. All Rights Reserved. Use of this site constitutes acceptance of our Terms of Use and Privacy Policy (Your California Privacy Rights) | CCPA Do Not Sell My Information
FORTUNE is a trademark of Fortune Media IP Limited, registered in the U.S. and other countries. FORTUNE may receive compensation for some links to products and services on this website. Offers may be subject to change without notice.
Quotes delayed at least 15 minutes. Market data provided by Interactive Data. ETF and Mutual Fund data provided by Morningstar, Inc. Dow Jones Terms & Conditions: http://www.djindexes.com/mdsidx/html/tandc/indexestandcs.html.
S&P Index data is the property of Chicago Mercantile Exchange Inc. and its licensors. All rights reserved. Terms & Conditions. Powered and implemented by Interactive Data Managed Solutions. | EU Data Subject Requests