With the COVID-19 crisis dramatically accelerating digitalization, businesses such as video conferencing and cloud computing are booming while much of the traditional economy suffers. Nonetheless, the virtual world still depends on physical IT infrastructure—putting the companies that help make this infrastructure in a strong position.

Japan-based NGK Insulators is one such company. From its 1919 origins as a manufacturer of ceramic insulators, the company diversified into ceramic substrates for automotive emissions control systems in the 1970s, then semiconductor production equipment (SPE) in the late 1990s. “Our antennae are always out, hunting for new possibilities,” says company president Taku Oshima. “Everything we do is based on a century’s worth of expertise in ceramics.”

That know-how is precisely what enables NGK to create products capable of delivering outstanding temperature uniformity and withstanding the corrosive plasma and gases used in semiconductor manufacturing. The company specializes in electrostatic chucks (which keep silicon wafers flat during etching) and ceramic heaters (which support and heat silicon wafers during film deposition). Oshima is bullish about semiconductor demand and, by extension, demand for NGK’s SPE products. “All the new technologies—5G, IoT, A.I.—depend on semiconductors,” he says.

For the Internet of things, NGK is pinning its hopes on EnerCera®, a series of lithium-ion rechargeable batteries as small as a coin and as thin as a postage stamp. Already in use as an embedded power source for smart cards, EnerCera has sparked the interest of auto manufacturers because of its high heat resistance. “Cars get hot, especially around the engine compartment, so we’re aiming to raise EnerCera’s beyond its current heat resistance of 85° C,” says Oshima. “Modern cars are full of sensors that collect and transmit data. As a wire harness–free power source, EnerCera is the perfect solution for automobile sensors.”

Further down the road, Oshima sees energy harvesting—deriving energy from ambient sources such as heat and vibration—as another opportunity for EnerCera. He gives the structural health monitoring of a bridge as a use-case example. The sensors embedded in the structure to monitor its condition could be powered by EnerCera batteries that self-recharge from the vibrations of passing traffic. The result? Real-time remote monitoring with a minimal amount of cables or maintenance.

EnerCera was the brainchild of the Ceramic Battery Project, one of two NGK companywide projects that pull in staff from throughout the company—not just from engineering but also from sales and marketing, purchasing, and legal—to speed up the development of priority products.

Thanks in part to this coordinated effort, NGK now has a broad battery offering, extending from the coin-size EnerCera to shipping-container-size NAS® batteries. NAS batteries—high-capacity sodium-sulfur batteries that help to stabilize the output of inherently volatile energy sources such as wind and solar—are poised to play an increasing role as the world shifts decisively from fossil fuels to renewables.

In addition to NAS and EnerCera, NGK is developing a medium-size zinc rechargeable battery. In a world first for storage batteries, its marketing claims—including no thermal runaway or fire by surface heating—have been verified by UL, an independent safety-testing lab in the United States. (This level of safety stands in sharp contrast to lithium-ion batteries, whose proneness to internal fires and overheating makes them too risky for use indoors.) “In the coming years, power generation is going to become more decentralized with more resilient and flexible microgrids,” says Oshima. “Our zinc rechargeable battery can be the optimal distributed-energy solution for indoor installations.”

In a sign of its commitment to the clean-energy future, in April 2020 NGK launched a new division that will focus on the energy storage business, in particular the creation of synergies between NAS and zinc rechargeable batteries. “We believe in our battery business. We want to create energy-storage solutions that are of real benefit to society,” Oshima says.

Founded with a mission of electrifying Japan’s economy, NGK has social contribution in its DNA. The company’s focus was on the national good in the early 20th century; now it applies the same altruistic mindset to global challenges. For example, it was the air pollution bedeviling major American cities in the 1970s that inspired NGK’s move into the business of automobile emissions control with ceramic substrates and particulate filters for gasoline and diesel engines, an area where it is now the global frontrunner.

But here too the company is not resting on its laurels. To reduce first-minute emissions from automobile cold starts (which produce the most toxic emissions of the whole engine operating cycle), NGK is seeking to develop preheating technology for catalytic converter substrates. It is also developing all-solid-state ceramic battery technology for electric vehicles to protect against the possibility of any abrupt shift away from internal combustion engines to cleaner hybrids, plug-in hybrids, and EVs.

History suggests that however the world evolves, NGK will stay one step ahead. Since 2017, the company has set for itself the ambitious target of generating 30% of total sales from new products. Oshima attributes the company’s success in innovation to a three-pronged, three-speed strategy rooted in in-house R&D, market-driven responses to customer needs, and new ideas being generated organically by each business unit. Says Oshima: “Our approach is to envision the world as it will be in 20 or 30 years’ time, ask ourselves how we can contribute to that world’s needs, and develop products accordingly.” 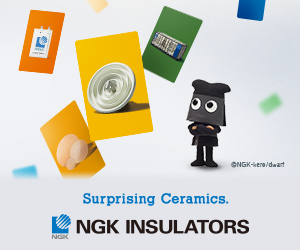