In January, when COVID-19 was beginning to make U.S. headlines, Jason Porter, senior vice president of the FirstNet Program at AT&T, learned the U.S. military needed help setting up a communications network for new quarantine centers. The centers would house people returning to the U.S. from China for 14-day isolation periods, and the doctors, nurses, and police and military service members working there needed to stay connected with one another without worrying about their cellular networks going down.

Porter, a former U.S. Army captain, leads FirstNet, a communications network built specifically for first responders. It’s similar to normal mobile networks, but the cell phones, computers, and other devices first responders use have priority and preemption across the network. That’s like giving public safety the “lights and sirens” treatment on the communications highway.

With COVID-19 cases rising in the U.S., FirstNet had to ensure that the quarantine bases—and later, field hospitals—across the country could get cell coverage. So the company made capacity adjustments to existing cell phone towers and has deployed portable ones dedicated for public safety use. “We’re on naval ships, tribal lands in Wisconsin, and we’ve carried devices into neonatal clinics,” says Porter. “We want to be wherever first responders are working.”

The idea for FirstNet was born in the aftermath of 9/11, when first responders had trouble communicating through New York City’s jammed cell phone and radio networks. It is built with AT&T in public-private partnership with the First Responder Network Authority (FirstNet Authority)—an independent government agency within the U.S. Department of Commerce and part of FEMA’s national response center. Legislation was passed in 2012 to create FirstNet, and in 2017 the FirstNet Authority awarded AT&T the contract to build, manage, and develop the mobile network.

The system was created with natural disasters and terrorist attacks in mind, but it has proved useful during the COVID-19 crisis and even in the search for missing children. In Alabama, 200 first responders used FirstNet to search for—and locate—a 4-year-old.

Jay English, chief technology officer at APCO International, the world’s largest organization of public safety community professionals, helped brainstorm FirstNet and says it proves that public-private partnerships can work despite competing business and government interests. “It’s incredibly important to have these capabilities in the hands of America’s emergency responders, allowing them to do their jobs better, safer, and faster,” he says.

FirstNet already covers 99% of the U.S. population today, and Porter is confident that the system is ready for anything. “We’re battle-hardened,” he says. “FirstNet has proven its worth, and now we learn and get better every time.” 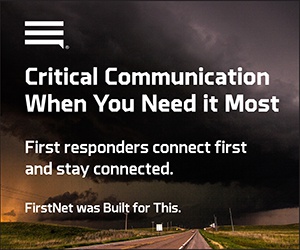